Q, the popular music magazine, has released its final issue (September 2020) after 33 years of publication. 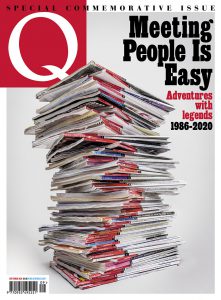 Editor Ted Kessler has stated that the Covid-19 outbreak caused a decline in sales and advertising revenue.

This will feel like the end of an era for many as Q was a big name in the music industry. The interviews, news, and editorials in this magazine were inciteful and influential. From its early days with features such as Tom Hibbert’s “Who the Hell” interview series, to now, Q had a great mix of earnest and funny content.

Q was such an influential name in the music industry, they had their own awards show, giving smaller, up and coming artists recognition, as well as the artists still going after decades. Q have also had their own radio show and TV channel, though both have not been in operation for some years.

In recent years Q has been a smaller operation, focusing on interesting emerging artists in an attempt to garner a broad indie appeal.

Q will not be going online, as other publications have, they look rather different now and have not been able to transition. There is something special and different about print media that online platforms cannot capture. The curated collection of articles means you come into contact with artists and writers you wouldn’t look for.

Q chose their name and logo specifically for print, their big red and white logo stands out on the newsstand. They were almost ‘Cue’ but switched to avoid confusion with snooker publications.

It is a big loss on the newsstand for music fans, the curated collection of music content is increasingly difficult to find in the internet age.

The final issue was published September 2020 certainly went out with a bang.